A Complete Guide to Heat Pumps in Australia

A heat pump is a device that is primarily used to transfer heat from a lower ambient temperature into a higher temperature system. Its function is, in essence, pumping heat from one place to another, that is why it is called a ‘heat pump’. This is in contrast to air-conditioners and refrigerators whose main function is to extract heat from a cooler system and release it into a warmer surrounding.

It can also be configured such that it can work in either direction to provide both heating and cooling, depending on the need. These are called reversible heat pumps. If the heat pump is dedicated to heating applications only, the term ‘dedicated heat pump’ is sometimes used to differentiate it from reversible air-conditioning units.

In Australia where the climate is considerably varied and where there are four seasons across most of the country, heat pumps are generally used in space heating/cooling and hot water system applications. In residential and commercial establishments, they can be used for air-conditioning, cooling potable water, space heating, and heat pump hot water systems for bathing/sanitation. In Australia, heat pump water heaters (HPWH) comprise approximately 3% of water heaters in use.

Aside from the above-mentioned, heat pumps can also be used in industrial applications such as process cooling/heating, boiler feed water preheating, drying, pasteurization, and washing processes. The advantage of using heat pumps in these applications is that industrial plants have waste heat flows. Instead of releasing this heat into the environment, it is usually more economical to utilize it in some of their step processes.

The diagram shows an example of a water to water heat pump system that recovers heat from various sources to provide increased COP and reduced energy cost. 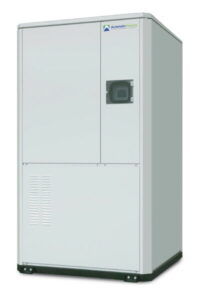 Revere™ CO2 Water to Water Heat Pump is a heat pump system that generates hot water and chilled water or hot water only by recovering energy from renewable and waste heat sources such as waste water from industrial processes, cooling water from a conventional cooling tower or ground water/geothermal heat.

What is a Heat Pump

The first scientific principle explaining the mechanism behind heat pumps was first developed in 1852 by Lord Kelvin, an Irish-Scottish physicist and engineer. He based his principles on the science behind refrigeration, which is basically the opposite of how heat pumps operate. In the end, it was Robert C. Webber, an American inventor, who designed and constructed the first fully-functional ground-source heat pump in 1948. His idea was prompted when he accidentally burned his hand on the scalding hot water being produced by his electric deep freezer. Wanting to utilize this heat, he ran the hot water into a pipe and used a fan to distribute the heat from the pipe into the surroundings. He later on developed a full-sized equipment using Freon as refrigerant to provide heat for his entire home.

ASHPs extract heat from the ambient air, while WSHPs may utilize heat from hot springs, volcanic activity, waste hot water in industrial plants, and even just the geothermal energy available underground. ASHPs are generally cheaper than WSHPs in terms of installation and material cost, however, WSHPs are usually more efficient and stable. Choosing the right setup depends on local conditions and the needs of your property.

The performance of a heat pump is typically measured by its Coefficient of Performance (COP), which, by definition, is the ratio between the heat output to the electrical energy input. This means that the higher the COP, the more efficient the system. Theoretically, the highest COP that the system could achieve is defined by the Carnot efficiency equation:

As seen in the equation above, aside from the absolute temperature at the condenser, another major factor that affects a heat pump’s performance is the difference between the temperatures where the condenser and evaporator are operating. The narrower the temperature difference, the easier it is to transfer heat. However, even this maximum COP could not be achieved in reality due to losses due to friction, design constraints, dirt, and other inefficiencies in the system. To decrease these losses, all components must be properly designed and sized, and the heat pump must be properly maintained. To learn more, see our article on Heat Pump Efficiency by Dr Paul Bannister.

Refrigerants are the blood of heat pump systems. They allow the transport of heat within the system from one component to another. Over the past 40 years, however, they have been subjected to changes due to environmental concerns, particularly ozone depletion and global warming.

Starting in the 1920’s, chlorofluorocarbons (CFCs), like R-12 and R-22, were the first refrigerants to be widely used in the market. In the 1970’s, however, it was discovered that the ozone layer of the earth has been depleting, causing the surface of the earth to receive more extreme ultraviolet rays from the sun, which, in turn, may lead to global warming and various health problems.

Due to this, the Montreal Protocol was proclaimed in 1987 to combat the depleting ozone layer. One of its directives was to phase out CFCs due to its chlorine content – a substance that is identified to be one of the leading contributors to ozone depletion.

As an alternative to CFCs, hydrofluorocarbons (HFCs), like R-134A, R-410A, and R-404A, were developed during the 1990’s. However, although HFCs didn’t contain chlorine and they didn’t deplete the ozone layer as much as CFCs did, it was later discovered that their Global Warming Potential (GWP) is as high as 1,430. This means that the amount of heat that they can trap in the atmosphere is 1430 times that of carbon dioxide. Therefore, HFCs are now also being phased down.

In response to this, a new wave of refrigerants that are more environment-friendly, like CO2 and HFO, are being introduced in the market. Dr Paul Bannister explores the properties of CO2 as a refrigerant in more detail in his article All Change: New refrigerants in heat pumps.

With the increasing demand for environment-friendly refrigerants, EcoCute CO2 heat pumps are becoming more widely available in the market. As the name suggests, it is a type of heat pump that uses supercritical carbon dioxide as refrigerant. The term EcoCute literally means “natural refrigerant heat pump water heater” in Japan, where the technology originated.

Using supercritical CO2 as refrigerant is more advantageous than its predecessors as it does not deplete the ozone layer and it has a GWP value of only 1.0. The COP obtained using this refrigerant is also typically higher than that using HFCs, especially in applications where a high temperature difference is required between the inlet and outlet water. Lastly, it can achieve a higher maximum hot water temperature than other refrigerants, making it ideal for both industrial and domestic hot water use.